The two shores of Love 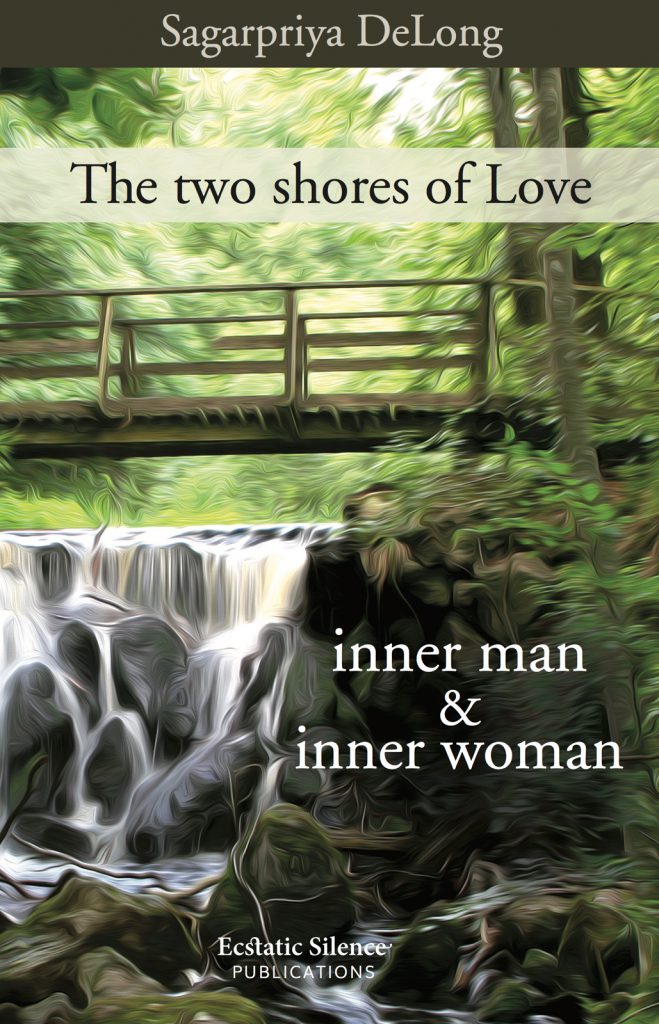 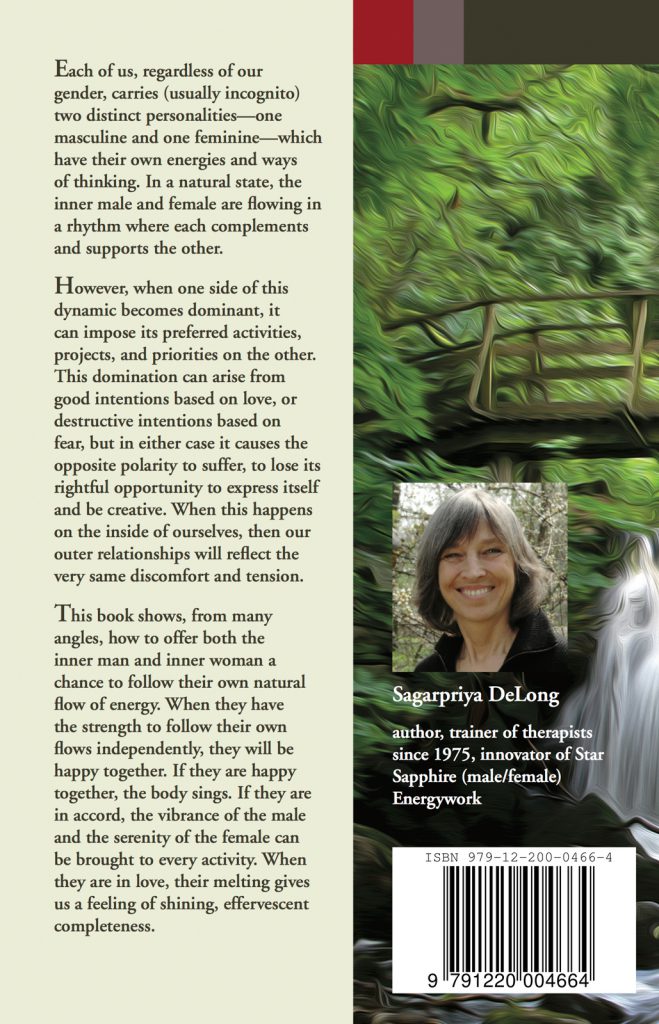 Man is not only man. Woman is not only woman. Both have the opposite polarity hidden inside, and everybody is “male plus female.” This book explains how to get to know the two characters inside yourself—they have distinct and unique characteristics, almost like two individual persons.

It can happen that, as you are growing up, one of your two polarities gets appreciated. Your family, neighbors, teachers, and friends all think that part is great, and it is given every opportunity to experiment in life and to express itself. That part will become strong. That part will become important. Then, when another part of you wants to be exactly the opposite, and express a quality antithetical to the first, it will be prevented. The weaker side will be forced to abandon its projects and suppress its interests until, after a while, it doesn’t even connect anymore with what it would like to be doing.

This one-sidedness causes all kinds of problems, which can be solved by bringing the characters into view and letting them have a dialogue. The book proposes several techniques for this purpose. What often comes to light from the dialogue is that one of the two characters (and it is usually the weaker one) doesn’t think the body can survive any other way than by continuing to do something unpleasant. So what looks in the beginning like a relationship imbalance soon moves into the arena of work, because creativity is so much connected to each character’s well-being.

This book shows that the two parts of you can learn to love each other in a new way—never by sacrificing, never by shrinking, never by one serving the other, but rather by each coming into a full expression of its own joy. If one side of you is still “small” through neglect, it can be given the chance to grow, until it becomes the perfect mate for the other. Then they automatically feel love and appreciation for each other; they automatically celebrate each other’s presence. There arises in you a feeling of completeness, a satisfaction in life that was missing before because it could only come from inside.

Once you become aware that you have two counterpoised aspects, male and female, you will discover in the same moment that there is a rift between them. In almost everyone, they are at war. It is not necessarily a hot war. In myself, one was dominant (the female) and the other was collapsed (the male). The male had actually gone to sleep, finding this the most convenient choice given the situation, and the female had become grey with the tiredness of doing everything alone. If you look closely, this is a political game—and which one do you think is the winner? Fritz Perls used to say, “The underdog always wins.” But winning is not worth much.

Actually, the real politics is within you. We can see very well the politics that is outside. We see the countries vying with each other, scrambling to be the victors on many fronts, economical, political, social. And we see the wars that arise when an attempted domination is not received with enthusiasm. These wars are simply a reflection of what is going on deep inside each individual. When individuals change—that is, you and me—and each person becomes a fountain of love inside, wars will simply be impossible.

Along the way, I learned that the relationship which you see on the inside, between the two polarities, is the same as exists on the outside. For example, in myself I discovered that the male part inside me would have liked to stop school at an early age. In fact, because I was not at all listening to my male part at that time, I continued on a very intellectual path, following a course in philosophy at a select American university, for years pouring my energy into being a good student. But later, when I got married, I chose a man who had dropped out of school at the age of 16. And when I married for the second time it was the same, and also in the third relationship. All the men were very intelligent, but they had all quit their formal education at age 16!

After I became acquainted with my inner man, I discovered that he is attracted to the materials from which you build houses—wood, stone, plaster, tile—and if he could choose his ideal work, it would be carpentry. Also, he likes to find practical solutions to mechanical problems. On the surface of myself, I have always believed that I cannot even change a light bulb. And yet, all of the men in my life have been carpenters or handymen, and some, at other moments in their life, have also been mechanics!

It doesn’t happen only to me. So often I will hear a client say, “My inner woman is just like my wife,” or sometimes, “That’s exactly the way my girlfriend would express herself.” This is not an accident; there is an urge within us to unite our masculine and feminine energies, to make them one. And so a man will search outside for the person most appropriate for him, which means similar to his inner woman. A woman will find a man with the characteristics of her inner male. In a whole crowd of people, you are able to eliminate hundreds until your choice finally narrows down to one and you know for sure that’s it!

I always consider these three aspects within a person—work, relationship, and meditation—as a unified circle, where each element is influencing the others.

I’ve discovered, working with the inner male and female of many people, that the problem the client presents to me is a symptom of dysfunction in the circle. And often this symptom comes to the surface in an area that is not the one where the problem really exists. This is natural. In the real area, where in fact the problem has its roots, the person doesn’t want to change anything. In the real area, there will be an investment, something the subconscious doesn’t want to disclose. Even the client doesn’t know because it’s hidden from his or her view.

I have learned to expect that the solution to the problem will be in one of the other two areas, and not in that area where the person experiences discomfort. So I am interested to hear about the symptoms only because they are a sure sign of where I will find nothing!

In sessions, I never omit the subject of work even if the client doesn’t bring it as a problem. You will remember that in chapter five I said that work, relationship, and meditation are all interconnected as parts of a circle. A disequilibrium will appear in the other two aspects of the circle when one polarity is lazy about work and not aware of the consequences.

And this imbalance shows up frequently in people, because very rarely is the responsibility for work divided in half, 50% for each polarity. The more common proportion is 70% for one side, and 30% for the other side.

To help you get a feeling for how the proportions can vary, I’ll give you some examples. If a person has work that requires relating with others and the success of that activity depends on the depth of contact, the feminine side will probably tell me that she does 90% of the work. Then the masculine side will tell me that he is very little involved, maybe 10%. If I have a lawyer as my client, I assume that a large part of the work will be done by the masculine side because it includes rational argument and paperwork. But I shouldn’t cling to my assumption because many lawyers take care of their clients from the heart—which requires the abilities of the feminine side.

You can make your own guess about Leonard, the client we met in chapter six. If you remember, he is the designer of car engines using sophisticated computers. His masculine side is the engineer, the solver of problems, so what do you think?—is he doing 100%? Yes, it’s true. The feminine is only pushing him and not working herself! Very shortly I am going to introduce Linda, who works in a restaurant. When she was a cook, her two sides were balanced at 50% each. After she was promoted to coordinator she got in trouble, because the male’s responsibility increased to 80%, and the female’s dropped to 20%.

Whenever I meet an inner couple I try to discern which side is actually taking responsibility for the work—if earning money is necessary. Normally it is the more resonant side. And there are two reasons for this. First, the resonant part is more in contact with its natural inclinations; and second, it is more full of love. This side doesn’t even notice when it is carrying more than its share. Typically it will diminish its real contribution to the work rather than suggest a figure that embarrasses the opposite polarity.